Email vs LinkedIn InMail: Which channel to opt for lead generation? 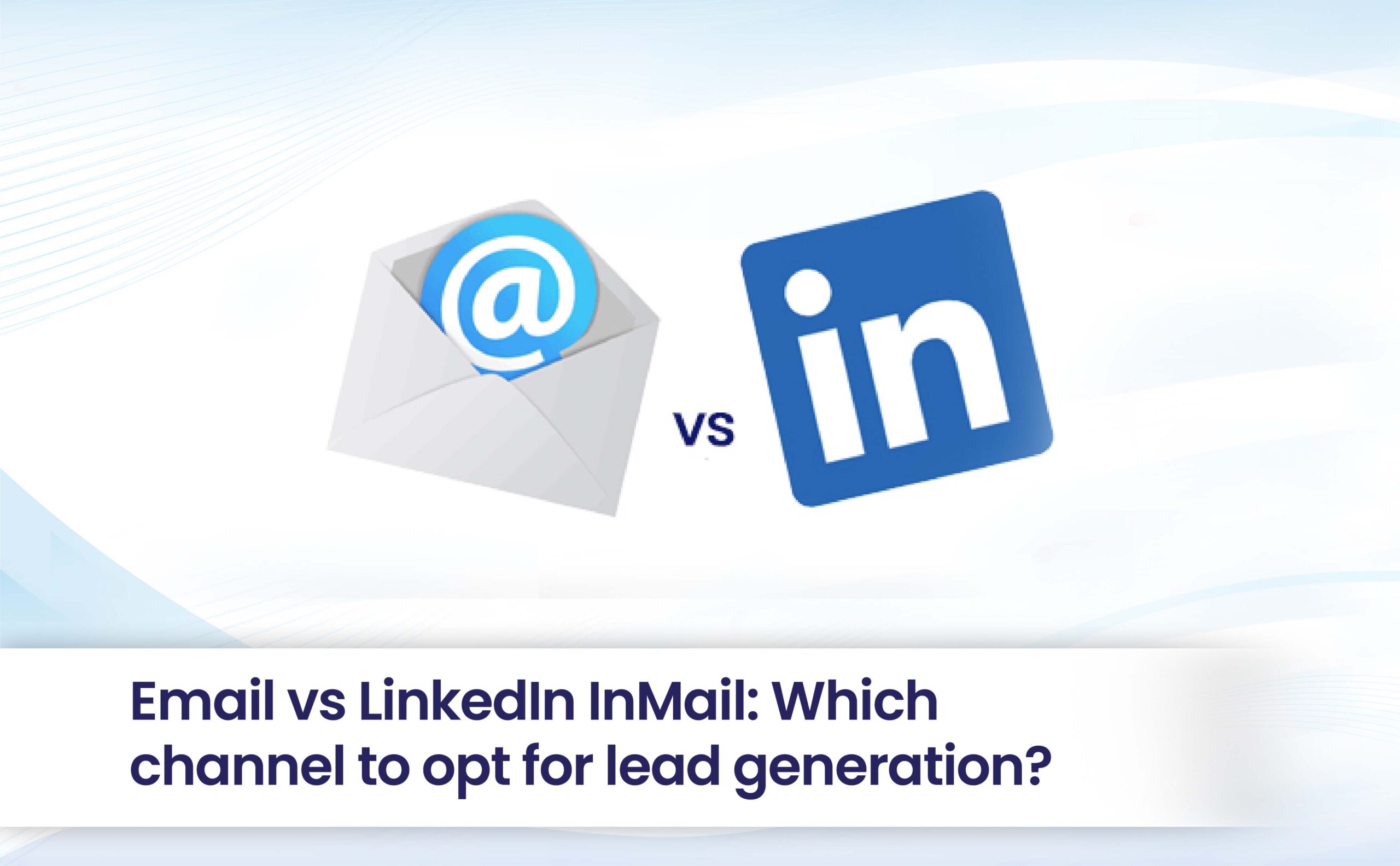 Businesses all over the world are trying to figure out the ideal time and cost-effective ways to generate leads. One of them is emailing, which is a time-tested method that sales representatives use. On the other hand, is LinkedIn’s sponsored InMail. Launched in 2016, it allows you to directly contact a LinkedIn user you’re otherwise not connected to, without ever leaving the platform.

So which channel should you opt for lead generation? Both email and InMail have their own set of pros and cons over each other. That is what we are going to discuss today. We’re going to compare the two based on 7 metrics, and then you can decide which channel is the most preferable for your business. 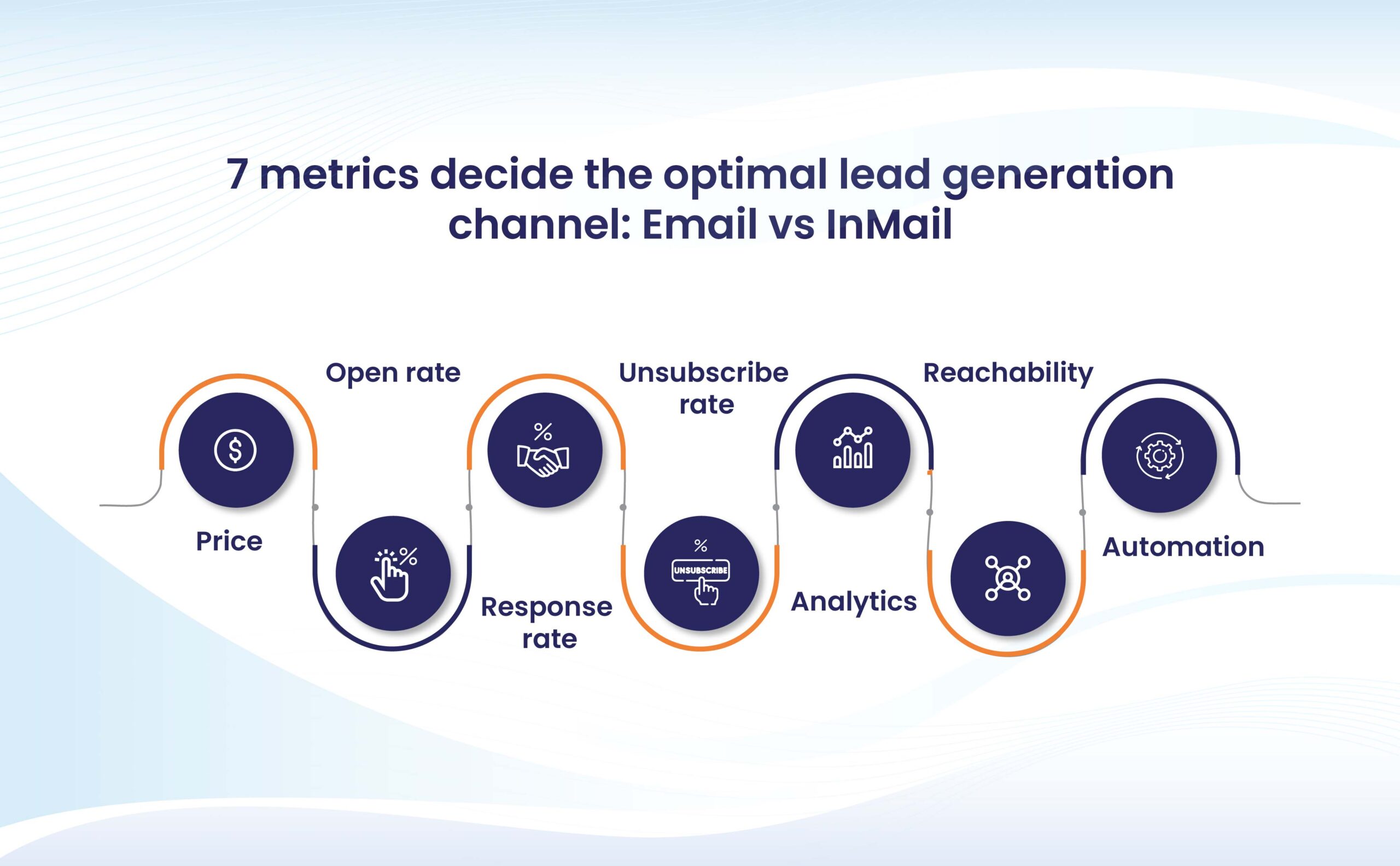 Budget is a major concern when it comes to any sales and marketing strategy. Email is a free lead generation channel especially if you ignore the composing and analyzing efforts. Whereas InMail is a paid service by LinkedIn. A LinkedIn Premium account costs $29.99/month. For added search benefits, you can instead get a Sales Navigator account for $79.99/month or $779.88/year.

By default, Sales Navigator accounts get 50 InMail credits. Once you hit the monthly limit, you can purchase more for $10 per credit. You can also earn back credits when your messages get responses within 90 days of the sending date. But, you can’t accumulate more than 150 InMail credits in a month.

While deciding to go for lead generation, you must keep these figures in mind. Consider the revenue you might generate per lead with respect to the amount spent. Take the most feasible route. Moving on, the next three metrics are all about the recipient’s reaction upon getting an email or InMail. Use the numbers to decide on a channel. 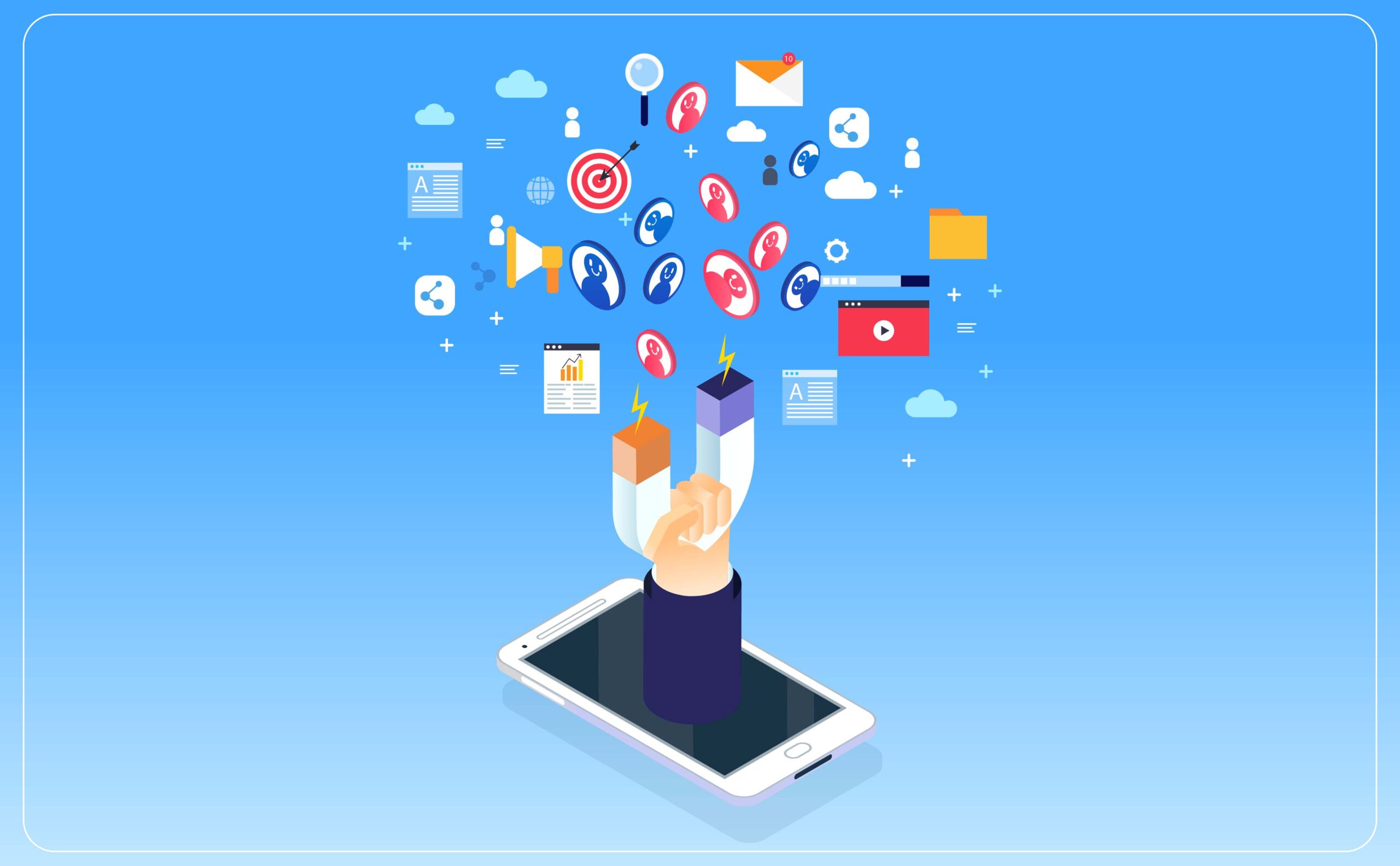 Despite the high spending, Inmail has an astounding 57.6% open rate in comparison to 21.6% of emails. Linked InMail offers a warmer and more casual atmosphere for approaching 2nd or 3rd-degree connections. A personalized message can do wonders for you. The cherry on the cake is that LinkedIn users are more likely to freely discuss new connections.

However, that’s not the case with emails. Since there’s no ‘face’ behind emails, they easily get archived or deleted.

Because of the ideology discussed above, InMail beats emails in response rates as well. A survey by LinkedIn says that even if both have the same content, senders have achieved a 300% higher response rate with InMail.

Another added benefit is the exclusivity of LinkedIn’s in-house mail services. It’s a premium service offered by a social media platform preferred by professionals. Recipients know that only a handful of companies can send them messages, and they can learn more about them with a single click.

The unsubscribe rate of emails is slightly higher at 0.3% with respect to the 0.1% of InMail. It means that more people are likely to unsubscribe from a cold email in comparison to an InMail message. Just like you, other businesses are also trying to personalize the outreach emails based on segmentation. Getting lost in the cacophony is not uncommon in the B2B business. Nevertheless, a human touch might eliminate this problem.

As said in the metric above, the InMail recipients can research your company at ease, hence the low unsubscribe rate. 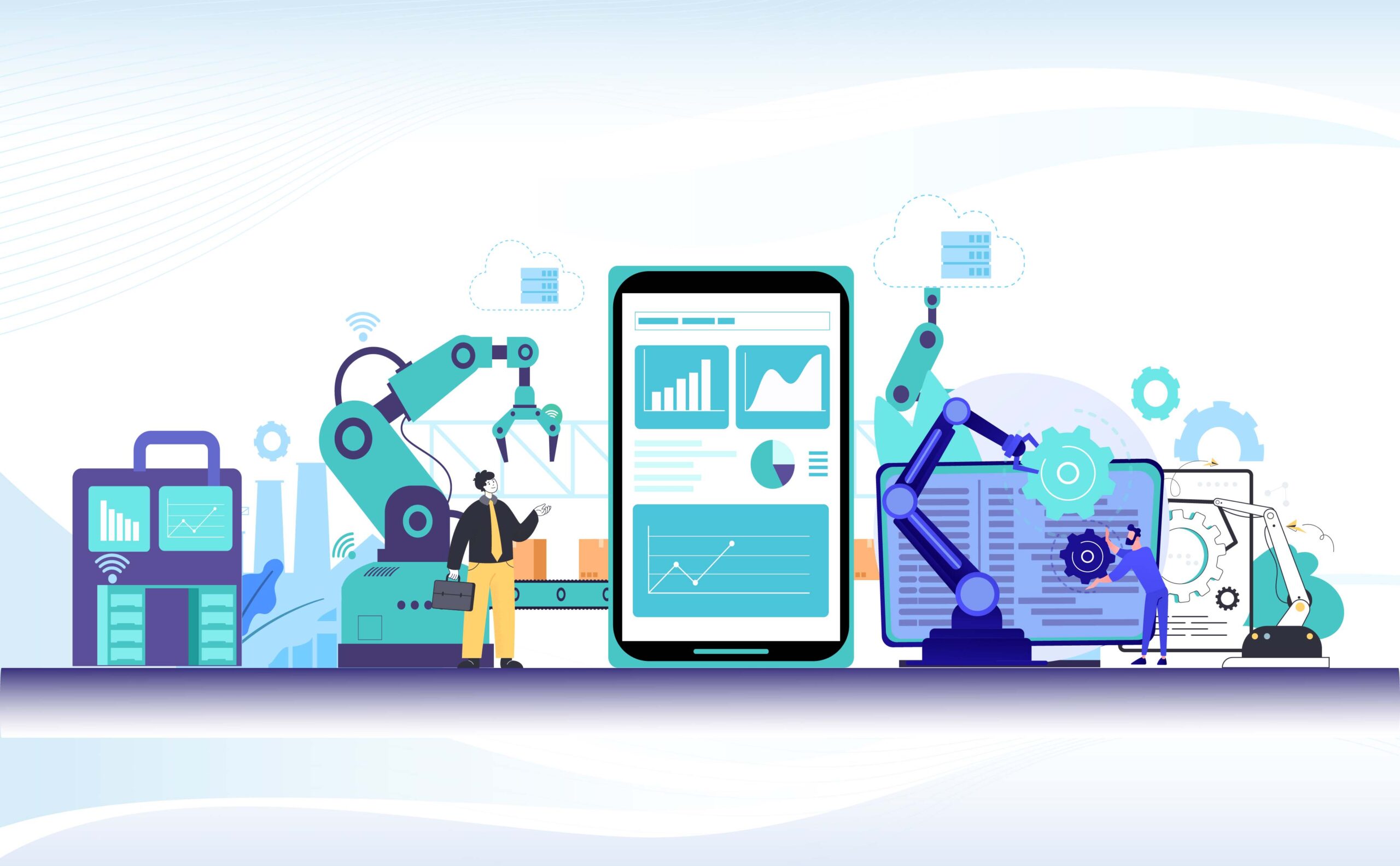 You can automate both emails and InMail. You can identify and define trigger messages for automated messages. Design a multi-stage drip email campaign based on choices that the recipient might make. Meanwhile, LinkedIn also offers automation tools that can send messages. You can define the engagement level for the tool and let it follow up with the target.

Email and InMail allow you to analyze their performance. With the right tools, you not only get the report but can use it to improve the efficacy of your lead generation strategy. The only difference is that access to the tools is free of charge. Since InMail is a premium service by LinkedIn, the analytics tool is also a paid one. 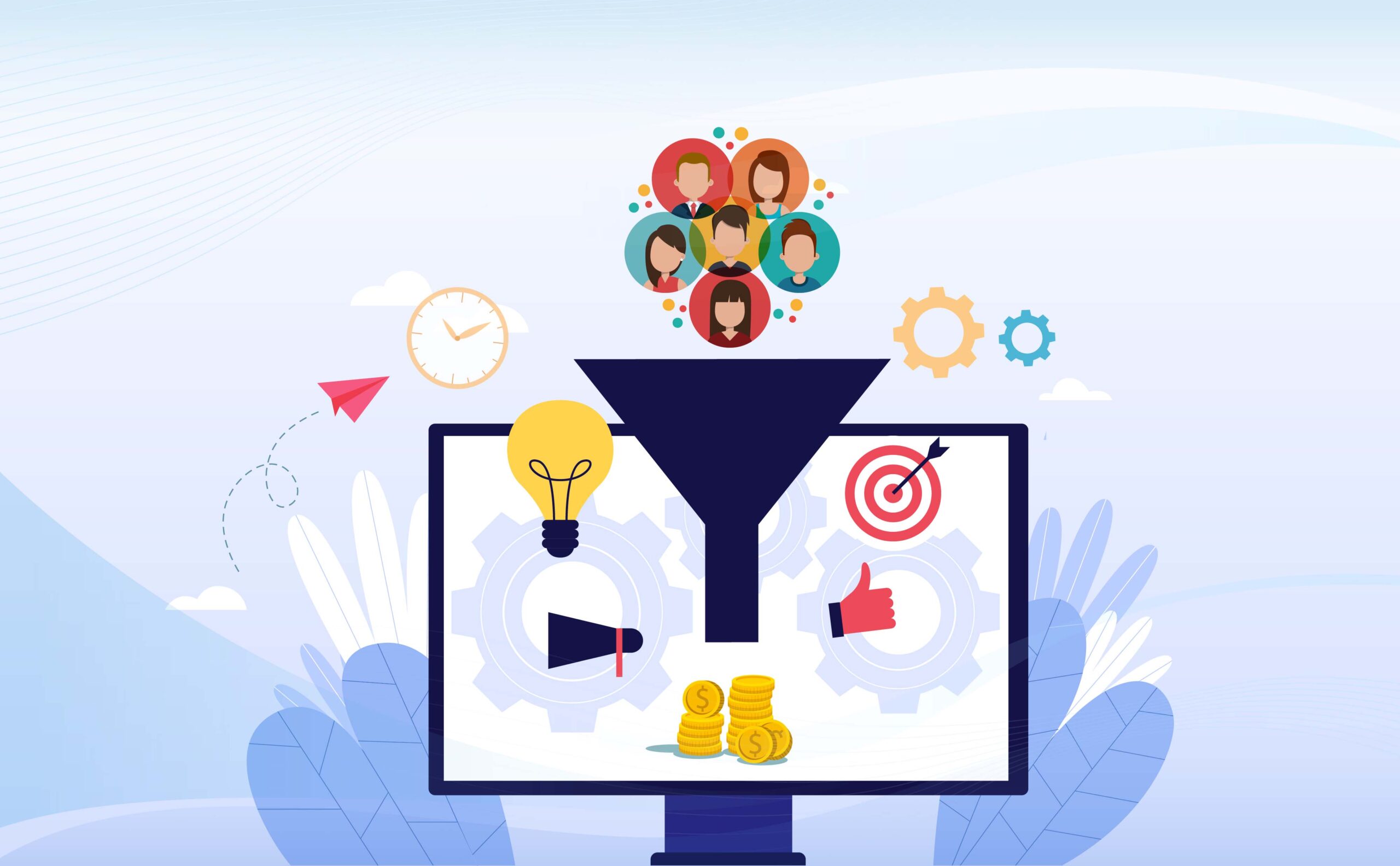 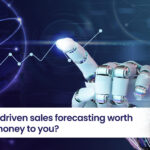 Is AI-driven sales forecasting worth the money to you? 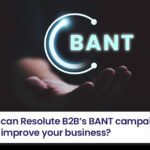 How can Resolute B2B’s BANT campaign help improve your business

Resolute B2B is a global lead generation company with capabilities to cater to clients with our Digital & Tele marketing presence powered with data intelligence  clubbed with high standards of quality results.

Sign up to receive latest news, updates, promotions, and special offers delivered directly to your inbox.
No, thanks